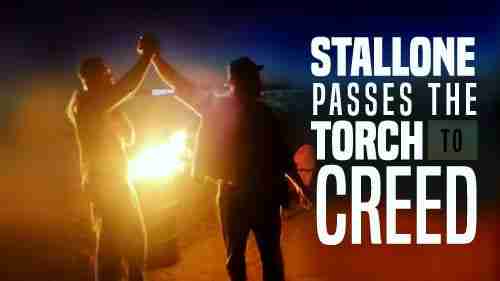 On the final day of filming for Creed II, Sylvester Stallone gave a typically humble and sentimental speech to his fellow cast and crew members.

Shot at night on location in New Mexico following the wrap of the training montage sequence filmed out in the desert, Sly stood near the same burning barrel seen in the film which … “takes us back” … to a couple of burning barrels we remember from earlier points in the series.

“I guess this is a pretty significant moment,” Stallone says of this video clip he shared on Instagram. “It was the last night of filming and probably my last privileged time of playing my beloved friend, Rocky.”

While MGM execs are already talking about moving on to Creed III, it isn’t clear whether Rocky Balboa would return for a ninth entry into the series, though Sly has repeatedly expressed his desire to stay with the character “until he turns to dust.”

“The most wonderful thing of all, is that ROCKY will never die because he lives on in you.”

Creed II certainly left Balboa at a point we can all be content with, safely rejoined with his family, strong and healthy once again.

Stallone captioned the tear-jerking video, referencing all of us – Rocky’s fans – or “Rockheads”, as he calls us, saying: “I just want to thank everyone around the whole wide World for taking the Rocky family into their hearts for over 40 years. It’s been my ultimate privilege to have been able to create and play this meaningful character. Though it breaks my heart, sadly all things must pass… and end. Keep punching, I love you kind and generous people, and Rocky loves you, too.”

This Much Is For Sure: 'Rocky V' Is Here Today
(Video) Interview with Michael B. Jordan on "Creed" Movie
Just Announced! Sylvester Stallone to Produce, Direct, Write and Star in "Creed II"
ROCKY II: Filming on the Streets of Philly with Frank Stallone, Sr.
Screen-Worn Clothing & Props from Creed II Now at Auction →