Enroll Now for an Exclusive Acting Class with Carl Weathers 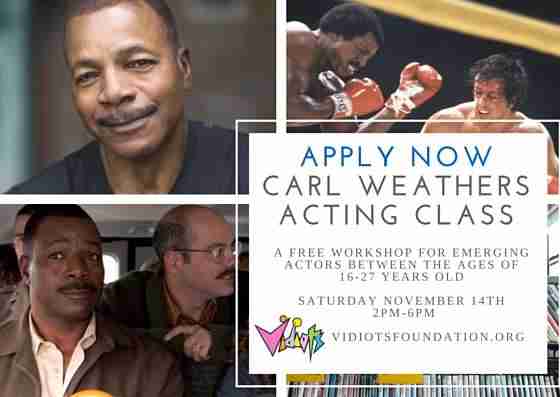 An eclectic Santa Monica, California video store turned cultural networking venue is hosting an exclusive acting class with Rocky icon Carl Weathers, the series beloved “King of Sting” Apollo Creed. Acclaimed for his 80’s action films Predator and Action Jackson, Weathers is still acting today can most recently be spotted starring in a series of Bud Light commercials. Sadly for Rocky fans, the actor has no involvement whatsoever in Creed, the 2015 spinoff movie titled after his most famous on-screen character.

This November, less than two weeks before Creed’s US premiere, Weathers is offering a free acting workshop for emerging actors between the ages of 16-27 years old. Actors are invited to meet Carl, learn how he got his start in the industry, gather advice about acting careers and Weathers’ methods on training as an actor. Finally, the chosen few will get an “acting workout” by performing scenes in front of the group and receiving notes and feedback from Carl Weathers himself.

According to their website, The Vidiots Foundation began as a movie rental store with a fierce commitment to making as wide an array of films available as possible – from vintage to foreign to documentary – and their event programming and outreach has that same eclectic flavor. The Vidiots Foundation expands the reach and community involvement of Vidiots through partnerships with community organizations, schools, filmmakers, artists and educators by providing free classes, screenings, panel discussions, spoken word, live music and other cultural events.