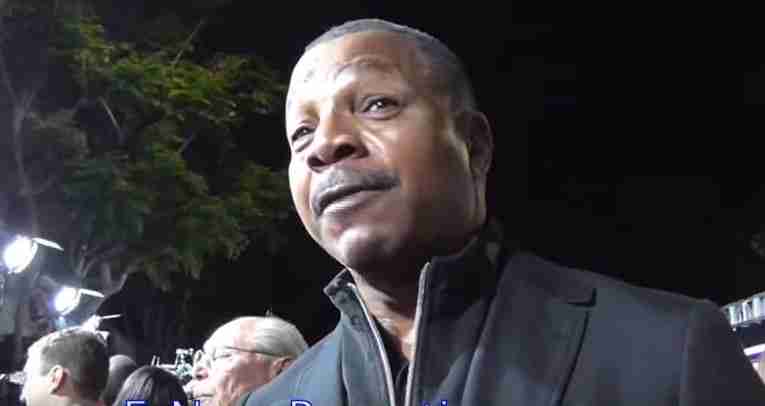 Carl Weathers gave Rocky fans a long-awaited surprise when he hit the red carpet for the Creed movie premiere in Los Angeles to join his former castmates Sylvester Stallone and Dolph Lundgren, as well as his new on-screen son, Michael B. Jordan. “This is fantastic,” Weathers said of the bustling premiere. “I just hope it’s successful for all the people involved and I hope people love it.”

Michael B. Jordan’s impressively ripped physique as the young Creed has been talking point for months since the first glimpses of his on-screen image were revealed. Jordan’s nearly year-long dedication to changing his diet and his body definitely did its work on film. “He looked fantastic,” Carl Weathers said of the actor’s body. “I’ve just seen him in promos and I went – WHOA!”

Recalling his own dedication to sculpting his body for Rocky, Rocky II, Rocky III and Rocky IV, Weathers said: “I know how hard I worked and it was beyond anything speakable – the word shouldn’t be spoken, it was that hard.” At 67, the actor’s tall, muscular frame is still imposing.

IF APOLLO CREED WAS AROUND TODAY, WHO WOULD HE BEAT?

“First of all, there are no real heavyweights out there that have the imagination of fans, so that would be a really good question,” Weathers responds. “I don’t know, he might have to go down in weight.”

@thepetemossshow Michael B’s CREED will entertain a lot of people. Coogler did a great job. Sly’s never been better. Go see it! #BePeace

What's the Mask Michael B. Jordan Wears in Creed?
Creed's "Fighting Stronger" Running Route
Enroll Now for an Exclusive Acting Class with Carl Weathers
Sylvester Stallone to Return to "The Rocky Steps" in Philly
"Taking the Hit" Featurette on Boxing in "Creed" →