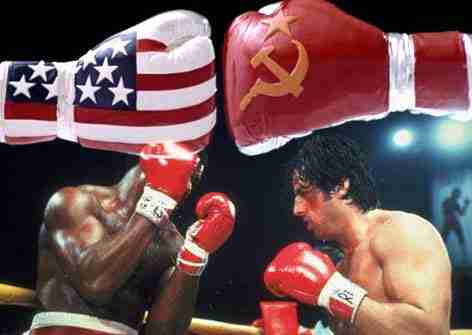 The answer is: a whole lot of different styles! Rocky wore a total of four top brands of boxing gloves throughout his professional fighting career. Let’s explore his style in each movie. 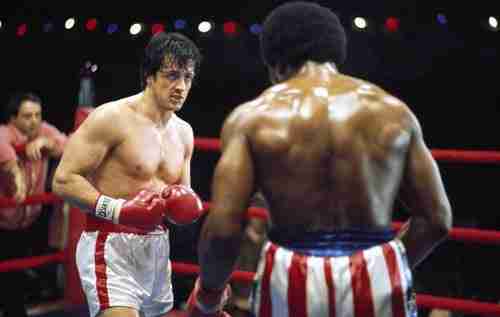 Per Casanova’s website, Sylvester Stallone hand-picked Casanova boxing gloves for use on film during Rocky’s first match against Apollo Creed in the original Rocky. In the Official Rocky Scrapbook, Stallone explains that the gloves “were illegal in the U.S., but the filmmakers decided to use them because of their sleek appearance”.

Both Stallone and Carl Weathers wore red lace-up Casanovas during the final fight, and the actors reported being in “real pain” after filming the fight scenes due to the bodily damage caused by the gloves. Both men are seen wearing the gloves in some of the most famous stills photographed by Sly’s then-wife, Sasha Satallone.

Although Sly auctioned a mountain of his incredible Rocky memorabilia in the winter of 2015, he kept his original red Casanova gloves in his private collection. What single item says “ROCKY” more than this pair!

Casanova was developed in 1948 and these classic gloves are still in production today in Mexico City. They can be purchased from Casanova’s official website.

In publicity photos for the original film, Stallone wears white Everlast hand wraps which are especially noticeable in the stills where he poses romantically with Talia Shire. This series of portraits is often seen on Rocky posters, including its earliest appearance on a United Artists poster.

The original fight-worn red gloves used by Stallone in the movie were placed at auction in 2015 with a minimum bid of $300,000!

In June, 2015, a pair of black Tuf-Wear gloves worn by Sly for Rocky II promotional purposes sold at auction for an incredible $34,000 (see the black gloves and boots here.) Stallone also wore a pair of black Casanova boxing gloves and a pair of red Casanova gloves (just like the ones in the original Rocky) for publicity photos with Carl Weathers.

StalloneZone reports that Sly flagged an in-authentic pair of black gloves in 2011, supposedly used in Rocky II, and had the pair pulled from a major auction. 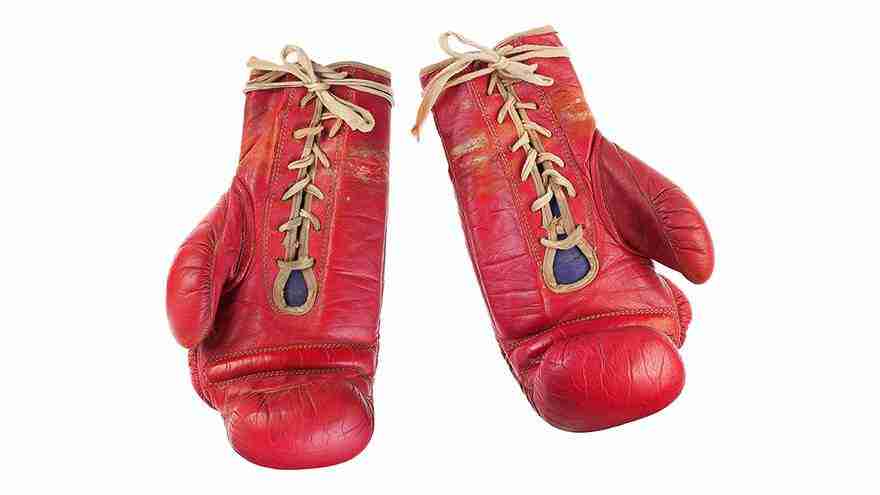 During the “Eye of the Tiger” montage in Rocky III’s opening credits, Stallone is briefly glimpsed wearing black Tuf-Wear gloves. These screen-used gloves were ultimately sold at auction (see them here.)

Both Rocky and Clubber Lang wear red Tuf-Wear boxing gloves for their second match at the end of the movie. Sly also wore red Tuf-Wear in publicity photos for Rocky III.

Rocky wears gold Tuf-Wear gloves for his first losing fight against Clubber which match nicely with his gold and black Italian Stallion boxing trunks. He laces up the same gold gloves again at the end of the film for his third fight with Apollo “behind closed doors”, as Adonis Creed puts it. 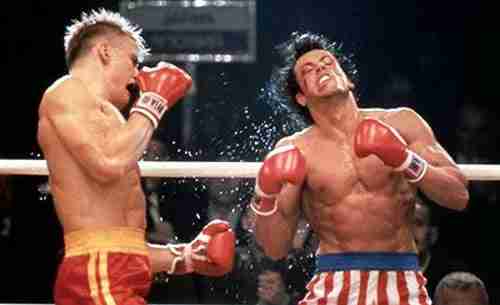 In Las Vegas, Apollo Creed wears white Tuf-Wear gloves accented with red for the last match of his life against Ivan Drago, who wears red Tuf-Wear, as he does when he fights Rocky.

You didn’t think we’d even mention Rocky V, did you? Because of his brain damage and subsequent retirement, Rocky doesn’t fight in the ring wearing gloves. In fact, one of the only times Rocky even handles a boxing glove is when he visits the abandoned Mickey’s Gym and picks up an antique leather boxing glove from the dusty floor.

Sylvester Stallone did, however, wear black Tuf-Wear punch mitts in promotional photos for the movie. 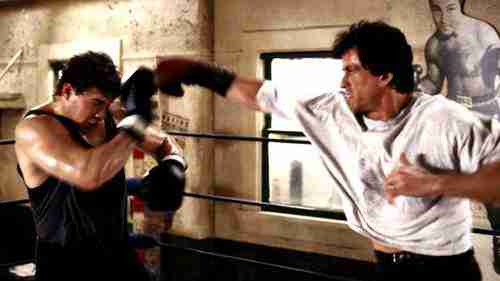 Meanwhile, during his training at Mick’s Gym, Tommy Gunn wears black Ringside boxing gloves. For the first time in the series, the brand name of the boxing gloves is taped over during Tommy’s professional matches in the ring (as are Union Cane’s gloves). This taping practice was something that Tommy Morrison used during many of his real-life boxing matches – the extra bands of tape on the outside of the glove provide an additional layer of strength and security to the wrist area.

Although it isn’t known for sure what brand is under the tape, it seems very likely that they’re Tuf-Wear, since Tommy and his opponents in the movie wear other Tuf-Wear gear.

Founded in 1910, Everlast is recognized as the preeminent dealer of boxing equipment for nearly 100 years. It was Heavyweight Champion Jack Dempsey who first got Everlast to create boxing gloves and headgear in 1917; Dempsey went on to win the title wearing Everlast gloves back in 1919.

Even though he ain’t wearin’ ’em anymore, he can still pick ’em. And to Rocky Balboa, Grant boxing gloves are “the best gloves in the world.” That’s some high praise!

It’s common for advertisers to pay big bucks to have their products featured – or even mentioned – on screen in a major motion picture like Creed. Surprisingly, this wasn’t the case with these big-name gloves that are used by the likes of Floyd Mayweather.

“Stallone called me himself and asked me if they could use Grant in the new Creed film,” Grant Elvis Phillips explained of his product’s on-screen placement, fitted over the fists of all the fighters in the movie. “Same with Southpaw. [Jake] Gyllenhaal called me himself to use Grant in the film. Unlike my competitors, they need to write a check … I don’t. I just stay in my lane and keep making the best and leave the rest in God’s hands.” 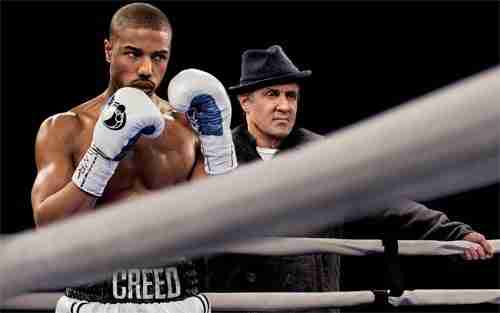 When Rocky takes his new protege Adonis Creed over to Front Street Gym to meet the guys, he introduces Donny to Phillips, the real-life CEO of Grant Boxing Gloves who had a cameo in this scene. “This is my good friend Elvis Grant,” Rocky says as he makes the introduction. “He makes the best gloves in the world. He’s going to make your gloves, that’s my gift to you.”

When Donny fights Leo Sporino under the fighting name of Adonis Johnson, he wears black Grant boxing gloves. Rocky’s custom made pair presented to Adonis for his title match against Ricky Conlan are predominately white with metallic red and blue accents; these gloves are very visible on the Creed movie poster.

Grant gloves don’t come cheap; used almost exclusively by professional fighters, a typical pair runs $300+ and most are custom made. You can have a pair ordered through their official website.